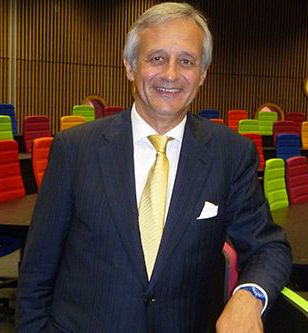 Professor Haspeslagh became Dean of Vlerick Business School per 1 May 2008, after a thirty year career at INSEAD. Vlerick Business School, founded in 1953, has campuses in Ghent, Leuven, Brussels and St Petersburg, and is the degree granting partner of Peking University’s BiMBA programme. The School is ranked number 16 in Europe by the Financial Times and is accredited by AACSB, AMBA and EQUIS.

Philippe Haspeslagh has a degree of Commercial Engineer of the Catholic University of Leuven (1972), a postgraduate degree in management from the Vlerick School of Management (1973). He also holds an MBA (1977) and a DBA (1983) from the Harvard Business School where he was a Baker Scholar, and a Diploma in Consulting and Coaching for Change from INSEAD (2007).

His research over the years has covered four areas: Corporate Strategy and the Strategic Process in Diversified Firms, the Management of Mergers and Acquisitions, the Implementation of Value Based Management, and Board Effectiveness.

Professor Haspeslagh has consulted widely on corporate role, strategic planning in diversified firms, acquisition management, and managing for value. He has conducted multiple Board effectiveness programmes and Board reviews. He was the Academic Director of the European Council on Corporate Strategy of the Conference Board (2000-2007).

In the asset management and private equity context he is a Board member of Governance for Owners, a UK active ownership fund; a Director and non Executive Partner of Procuritas, a Scandinavian Buy-out firm,; as well as Chairman and non-executive partner of Capricorn Venture Partners, a Belgian VC.

In the family business realm he is the Chairman and co‑founder of Dujardin Foods, a European frozen vegetables family firm and a non-executive Director of Vandemoortele NV, a large family held Belgian food firm. He also was Chairman of Pieters NV, Belgium’s largest fish processor until its sale to a trade buyer.