2012: No solutions without women

I read recently that each century doesn’t really get started until a decade or so later when profound changes take place.

We know that 2012 has been considered by analysts and for the first time also by politicians, as a dangerous year. For the past 20 years, experts have been saying that we can’t keep on using the same running model as it’s no longer sustainable. All sorts of theories have come to light, with some even heralding the end of the world in a few months. All kinds of solutions have been put forth, completely blurring the way forward at a time when we have no idea what events may ensue. The proof signalling the need for profound change in our working methods and lives, is still being questioned by some fools who predict a new cycle of growth. The cycles principle that we studied in economics has become completely obsolete. Worse still, is that the financial crisis of 2008 didn’t bring about any structural reforms even though there was total agreement that this is what was urgently needed. Society functions collectively as we function as individuals … we have to sink to the bottom before we can rise up again and give the best of ourselves, inventing new models and new collective projects.

And this time, how far do we have to go before we dare to change?

JUMP wants to add a contribution to this debate by treating the subject as part of the sixth edition of the Forum in Brussels on 26 April: TIME TO CHANGE: HOW TO BREAK FREE FROM OLD MODELS? We have invited visionary speakers who will help us understand the complexities of what is happening, but, more crucially, suggest new pathways for change. You’ll probably tell me that there are already plenty of events, some at a very high level, dedicated to this subject. But JUMP does it differently and with different types of inspirational people.

Differently, because we put equality right at the heart of the debate. Even if everyone (or nearly everyone) agrees that development and growth can only be achieved with a greater participation of women in the economy and in decision making, once the crisis is over, the old, patriarchal model comes back over and over. Take a look at what’s happened to women in the new Arab governments where these new “democracies” have set aside any aspirations of greater equality between the sexes. It’s not only depressing it’s dangerous. It shows that the way they exert power and the motivation for doing so remains exactly the same, just that now it’s under the guise of modernism. In the West, we have reacted in exactly the same way. Remember the tremendous break through of feminist ideas (=ideas of equality) just after World War II? Despite the new voting rights for women, the pressure of what was deemed “political correctness” in the 1950s forced them back to their function of domestic carers, child bearers and of being the rest of the warriors. The television series, “Mad Men” is a perfect illustration. No progress is never acquired forever.

Differently, because the speakers involved in the Forum are unusual compared to those who are generally involved in such debates. Firstly, the majority are women, which is rarely the case. Secondly, all of the speakers have integrated the dimension of equality into their thought. At JUMP, we believe it is not worthless. We think that women change societies and business profoundly, even if they are rarely aware of it. Instead of trying to transform professional women into behaving just like men, we should value their difference and their specific expectations. We think that this is essential if we have to adapt and reinvent a new way businesses and institutions do function. You know the myth of Isis and Osiris… It is the sheer determination and power of Isis that brought Osiris back to life thus transforming him into a phoenix, which symbolises the cycle of death and resurrection. That’s exactly what we need. Ancient times already recognised the power of women. A new model for society needs to be created by men AND women, or we will be left looking for it for years to come.

Just a few days to go until the JUMP Forum in Brussels and little more than a month until Paris. This year’s theme focuses on encouraging men to get more involved in gender diversity policy ... 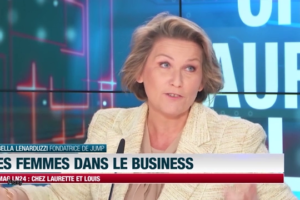